This article was originally drafted by E. Phoutsavath and Indochina Research for the newsletter “I-Light” as part of the Rockefeller Foundation’s Searchlight Process. For more Searchlight content on futurechallenges.org, please click here.

There is a saying in Laos that “the rich don’t go to prison, and the poor don’t go to hospital”. There is a lot of truth in this statement, as money can buy you almost anything in Laos. Only a small emerging middle class exists, made up of NGO office staff, and administrators working for the flourishing businesses in Laos. The middle class are keen to appear as wealthy as the rich elite, as they know they will go further in life and have more influence if they are perceived to be more well-off. Buying big land-cruisers on credit, purchasing imported clothes labels and dining out with the family at western-style ice cream outlets – where a chocolate fudge sundae will cost half a day’s salary for an office worker – is all part of the necessary act to appear wealthy. People are intimidated by those who are wealthy. “You are more likely to get away without paying a speeding fine if you are driving a brand-new Hummer than if you are in an old and battered Hyundai” says Mr. Tong, 30 of Sissatanak district, Vientiane Capital. 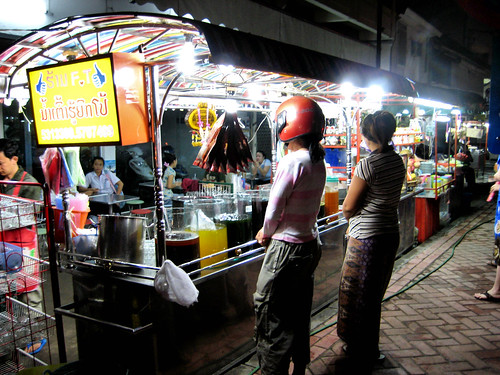 The influence of Thailand

Naturally, the middle class in Laos are striving for more wealth in order to have a better standard of living as well. The combined effect has led to a string of boutique shops and high-class restaurants springing up in the capital city, much like those found in neighbouring Thailand. Thailand has led the way in development and social innovation in the region, and Laos has been watching its progress from across the river. Goods from Thailand have become desired by the middle and upper classes in Laos, as the variety and quality of products on offer exceeds that found in Laos. This has led to many Lao merchants crossing the border every week in order to buy Thai stock to meet the growing demand. Ms. Nang, 29, from Don Noun village in Vientiane makes the 3 hour round trip every week across the border to buy Thai clothes to sell in her shop. “The young people who can afford the clothes much prefer them as they are more modern. The people who live in more rural areas still wear traditional Lao clothes” says Ms. Nang. This propensity to ‘buy Thai’ extends to all Thai goods – from laptops to music, from fridges to cars.

Being able to access the Thai market is exposing the rich Lao youth to the Thai culture, which is watering down the traditional Lao values that were once held by all. As a result, this generation of rich Lao youth will grow up in a much different country than their parents grew up in, but what the society looks like in the future remains to be seen.

What about the poor?

The rise of the upper class in Laos is also pushing up prices in the capital. Land that was USD 60,000 3 years ago in Vientiane is now USD 175,000. One kilo of the staple food, sticky rice, has gone up by 20% in 18 months in the capital. This is making life more difficult for the poorer Lao people who have not benefited from economic development. Mr. Hung, a rice farmer from Vieng Say town said that he couldn’t afford the rising cost of extra classes for his children, and is worried about their future employment prospects.

Speaking at the Asia-Europe People’s Forum in Laos in October 2012, Malaysian MP Charles Santiago asserted that “development and trade must be organised around the rights of our people, not on profits”. Until there is a societal shift and a change in development strategy, there will remain a growing imbalance between the rich powerful minority and the poor and disadvantaged majority in Laos.