This article was originally drafted by Usha Ganesh and Intellecap for the newsletter “Searchlight South Asia” as part of the Rockefeller Foundation’s Searchlight Process. For more Searchlight content on futurechallenges.org, please click here.

According to recent reports, the government plans to create opportunities for employment and self-employment with the proposed National Urban Livelihoods Mission (NULM) for 100 million urban poor in the 12th Five-Year Plan period (2012-2017). This is likely to replace The Swarna Jayanti Shahari Rozgar Yojana (SJSRY), which was launched in 1997 with the objective of urban poverty alleviation through employment. NULM will focus on building skills, entrepreneurship development and creation of employment opportunities in urban areas. The government hopes to run Aadhar Kendras (multi-service centers) as public-private partnerships (PPPs).

These programs still face several challenges. Many of them provide support in the form of pure technical training where people are trained in specific skills but not provided market linkages. Funding is often routed through banks that are not equipped to deal with the target population. Moreover, applicants require relevant documents, such as proof of residence, a ration card or a bank account. 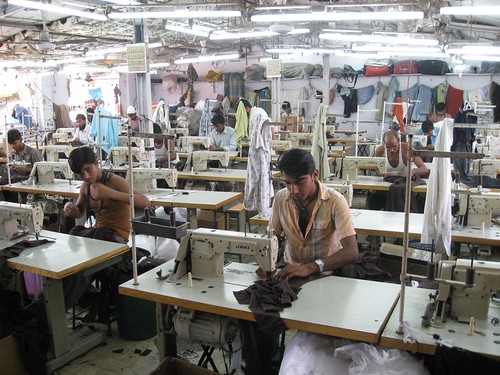 A locally-owned clothes factory that employs 600 people in the Dharavi slum in Mumbai, India (By BBCWorldService from flickr.com CC BY-NC 2.0)

The Ahmedabad-based International Centre for Entrepreneurship & Career Development (ICECD) has been engaged in micro, small and medium enterprise (MSME) development for the last 15 years. Recognizing that the current education system does not equip students for self-employment, ICECD offers training for those interested in entrepreneurship. ICECD has worked in nearly all the slums of Gujarat – from the cities of Bharuch and Ankleshwar to Surat and Ahmedabad. In order to scale, the organization has also trained a large number of trainers to work in Mumbai for World Vision, as well as trained over 600 trainers in 55 other countries.

Says founder HinaShah, “Because they do not believe they can be self-employed, they don’t show the initiative. We have to go to them and sensitize them to the fact that they can lead a better life. After 15 years in this space, we now have a large number of role models among the urban poor. When the slum-dwellers meet these entrepreneurs and see how they earn steady incomes of INR3,000–INR12,000 (US$55–US$20) per month, they start getting motivated.”

Over time, ICECD has built strong networks with various government departments engaged in MSME development and urban poverty alleviation. It has also developed strong linkages with banks that finance their entrepreneurs. Finally, they have been able to connect with businesses and larger corporates that engage with the entrepreneurs once they set up their respective businesses. These linkages help ICECD set the trained entrepreneurs on their path out of poverty.

ICECD’s project at the Guptanagar slum in Ahmedabad is a case in point. ICECD partnered with British Gas to promote entrepreneurship in Guptanagar with the objective of reducing unemployment, imparting market-oriented skills and increasing productivity and self-reliance among slum-dwellers.

In another landmark project in 2012-2013, ICECD was selected by the International Labor Organization (ILO) to run its microenterprise promotion program called Start and Improve your Business (SIYB) for the first time in India. The program aims to nurture 100 entrepreneurs from Ahmedabad slums in its pilot phase, which is underway and due to be completed in February 2013.

With migration, the numbers of the urban unemployed are only increasing. To address this challenge, multi-pronged programs that address issues of training, funding, market linkages and handholding support need to be replicated and scaled rapidly. ICECD’s model is established and the organization is focused on scaling it effectively to newer geographies. Apart from Gujarat, ICECD is very active in Rajasthan, Maharashtra and Northeast India. It predominantly works through partner agencies in each of these states, but also has teams travel as needed. The one constraint they face is that of trained people on the ground. Therefore, ICECD has focused on creating training for trainers in India and globally.

Self-employment is an avenue for the urban poor with an aptitude for business, but it also means they have to work that much harder to make it successful. The urban poor also tend to be isolated from information and are unaware of the different options available to them. The proposed Aadhar Kendras under NULM will help mitigate this information asymmetry. With more organizations adopting models like that offered by ICECD, the drive to develop self-employment would expand its reach, further developing the market linkages for these nascent businesses.